TORONTO, Sept. 24, 2019 (GLOBE NEWSWIRE) -- QMX Gold Corporation (“QMX” or the “Company”) (TSX:V:QMX) is pleased to report assay results from the reconnaissance drilling program on the Bevcon target. The Bevcon target is located 4 kilometers southeast of QMX’s Bonnefond deposit, and 1.7 km southeast of the New Louvre target. The drill holes are located along the west half northern contact of the Bevcon Intrusion in the eastern portion of QMX’s extensive land package in Val d’Or, Quebec (Figure 1).

“These are outstanding results confirming our confidence in our strategy to follow up the right targets outside our Bonnefond mainstay where we recently released a resource statement,” states Dr. Andreas Rompel, VP Exploration, “and it encourages us in our strive to expand our total resource to include the Bevcon region.”

In 2017, QMX compiled the geological data of the Bevcon intrusion area and started a multi-phase reconnaissance and exploration drilling program. The program focused on the northern margin of the Bevcon intrusion to the west of the past producing mine and along an east-west deformation corridor north of the intrusion. The overall program consists of 28 drill holes for a total of 16,748 meters. The objective of the drilling program was to identify possible extensions of the Bevcon mine along the northern margin of the intrusive and the shear zone to the north.

The northern margin of the Bevcon Intrusion hosts the former Bevcon mine (438,250 ounces of gold grading 4.3 g/t Au from 1951 to 1965, MERN-SIGEOM). Gold is associated with a complex Quartz-Tourmaline vein system and dykes within the intrusion’s northern contact, which was mined over a strike length of more than 1,000m and to a depth of 680m.

Gold mineralization in the Bevcon intrusive is known to extend below 1000m according to the mine’s historic records. In 2018, QMX released the results of hole 17311-17-008, which intersected 9.0 g/t over 6.8m below the last level of mine (QMX Gold NR May 10th, 2018), confirming the historical records. The Bevcon Intrusion is a large and underexplored system located on the eastern side of the Bonnefond - New Louvre - Bevcon trend in QMX’s East Zone. QMX intends to conduct more exploration on this target.

During the drilling program, assay samples were taken from the NQ core and sawed in half. One-half was sent to AGAT Laboratory or Swaslab Ltd., a certified commercial laboratory, and the other half retained for future reference. A strict QA/QC program was applied to all samples which included insertion of mineralized standards and blank samples in each batch of 20 samples. Gold content was determined by fire-assays on 50 grams of pulp with an atomic absorption finish. Repeats were carried out by fire-assay with a gravimetric finish on each sample containing 5.0 g/t Au or more. When visible gold was observed, a Pulp Metallic assays from all the pulverized material was completed.

The scientific and technical content of this press release has been reviewed, prepared and approved by Mélanie Pichon, P.Geo, M.Sc, Exploration Manager, QMX Gold, who is a "Qualified Person" as defined by National Instrument 43-101 - Standards of Disclosure for Mineral Projects ("NI 43-101").

QMX Gold Corporation is a Canadian based resource company traded on the TSX-V under the symbol “QMX”. The Company is systematically exploring its extensive property position in the Val d’Or mining camp in the Abitibi District of Quebec. QMX is currently drilling in the Val d’Or East portion of its land package focused on the Bonnefond plug and in and around the Bevcon Intrusive. In addition to its extensive land package QMX owns the strategically located Aurbel gold mill and tailings facility, which is expected to commence custom milling in 2019.

Table 2: Assay results from the Bevcon Target – East Zone
* Reported length measured along the hole. Additional drilling is needed to determine the true width of the mineralized zones
**Au uncapped 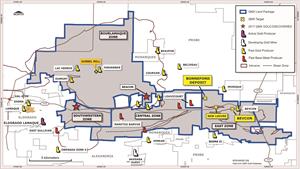